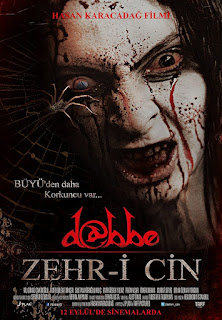 Are you like me, a fan of occult horror films? If so I discovered a new one on Netflix entitled “Dabbe 5: Curse of the Djinn”. It is subtitled in English because unless you speak Arabic, subtitles are required. However the story is allegedly based on real events in Istanbul and Bursa, Turkey.

The story begins with a ritual of a woman giving birth then having her baby is taken from her only to have it given to the djinns. Then we are shown a pair of late 20's modern Yuppie couple who begin to have strange things happen in their home.

Of course the same old horror tropes are involved, primarily the husband who is uber-rational refuses to believe his housewife is experiencing anything metaphysical yet he and she are devoted to “Allah” - which being religious one would presume he would take such things more seriously yet in almost every film on hauntings or possessions, it always seems someone in the film has to portray the skeptic to the bitter end regardless of what they encountered along the way. (Hollywood/Writers, this is getting stale/old!)

A witch-woman aka exorcist gets involved and you hear folklore, minor rites, a magic circle, djinn lore (which may or may not be accurate), a séance, astral travel to the realm of the djinns, and some other fun stuff. The cool thing about this film is you find out at the end, it is based on real events which happened and left the Police dumbfounded as to why some of the people involved were dead and why some were alive.

If you get a chance to view it and can deal with subtitles, I highly recommend it because it IS entertaining. I watched it on my laptop so that I could slow down the playback speed by 1/4 on Netflix and read the subtitles much easier otherwise at normal speed, I found the subtitles moving too quickly to catch everything. Plenty of scary elements in it and lots of interesting tidbits along the way for a fun scare-fest.

Posted by Moloch's Sorcery at 1:16 AM