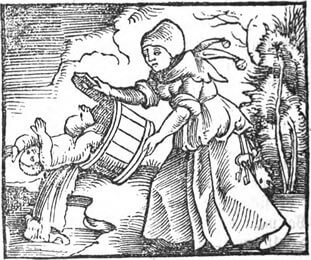 Recently, I had a Novice ask me for advice on beginner Witch books. I’m not up on the modern authors so I made some suggestions for authors I am familiar with, as I typically do. One author I mentioned, Ray Buckland, sent shock waves through the group causing many to freak out over my suggestion. By the reaction to his book suggestion you would have thought I suggested one of Hitler’s personal memoirs or some other equally horrid notion.

Throwing Out Baby With Bath Water

Okay, yes I do get the Cancel Culture idea especially if the person was a “known racist” or someone equally loathsome, and yet today I am seeing far greater reach for this concept of canceling out someone’s body of work especially if they wrote a book or two for the money and not for the sake of the art. In the case of Ray Buckland, his Romany book was such a book which seems to be the stake in his heart for some odd reason.

Never mind that Buckland’s big blue book on Witchcraft is an ideal intro to the subject, which is the same book that got me started way back in 1987. Or the fact numerous Hoodoo folks I know and respect, use Ray’s “Chant-O-Matics” book on a regular basis in their spiritual work. Yes his chants actually work as I have used many of them myself.

So Ray wrote a book or two for money? Big deal. The rest of his work is substantial and worthwhile. I had one Crowleyite picking apart Ray’s works and I had to remind this guy he shouldn’t throw stones while visiting a glass home since his own hero hardly had any sort of a spotless reputation. Furthermore I told this guy Hoodoo folks don’t seem to be into Crowley because they look for magic that works here and now.

Ray Buckland Is Only A Symptom of the Bigger Issue

It seems the youth of today with their Tick-Tock videos are being led by people who have no cred other than they can show an altar set up and just find information for free on the Net. How that makes one an expert is beyond me.

The other side of the coin is many youth seem to be judging others based on hearsay, rumor and hyperbole without facts or proof. It seems they hunt for blogs where some self-righteous asshat has an issue with a practitioner or author and yet this blogger has nothing other than some shady evidence (or just more hearsay) and this is how the cycle of deceit begins.

It’s like as adults, we are all back in grade school and dealing with the whole “popularity” problem all over again. Silly yes, however it is real and the real detriment of social media. It becomes a “he said, she said” sort of thing which is no good.

Look, if all you are going to do is follow and adopt the practices of people who only share your views, your politics or your opinions, then you are not going to find many to follow. Why? Because as a former Skip Tracer, I can assure you, if you dig deep enough on ANYONE, you will find dirt on them and most likely something which will oppose some belief, moral or truth you hold dear.

Do you stay solitary and not bother with commercial, mainstream or Internet info from occult authors who have dirt in their past? There are authors out there whom I know personally who have just done a reasonably good job of keeping their own dirt out of the mainstream and strictly private. They’re not nice people yet their fans are enamored with them. However this begs the question: if their fans discover some sort of dirt on them, will the fans abandon these authors?

Pedestals Are For Statues

We live in a culture where people today seem to worship celebrities and everyone apparently wants to be a celebrity in the spotlight. This is not a bad thing mind you however it seems fans want to place their heroes on pedestals instead of just admiring their body of work and leaving it at that. Pedestals are for statues not people because eventually people will say or do something to cause themselves to fall from their pedestal. Most average people say they understand this concept yet they continually engage in mounting those they admire onto pedestals just the same.

Today, even rumor and hearsay ruins a person’s reputation regardless of whether there are any truths to the allegations. Why? People are cynical and almost all of them believe everything they are told via hearsay, newsprint, or on video again regardless of whether what they’re told is fact based or an outright fabrication. You are guilty until proven innocent.

Because People WANT to Believe Bullshit

It ought to tell quite a lot about a person when they say they listen to someone like Fox News whose owner specifically stated in a Tampa district court that he was not obligated to tell the truth and yet millions still listen to what this network’s “news” function pretends to be. This has zero to do with political parties or sides because I am merely going on the auspices of what Fox Broadcasting’s owner stated under oath in Tampa’s court of law.

And because Fox News has kept its share of viewers even though everyone knows they fabricate a goodly portion of their so-called “news”, other news agencies began to follow suit and disseminate fiction as fact. And people eat that shit up too. This is why I am skeptical of any news source and its so-called news.

I have a friend of mine who is a ham radio operator who gets his news directly from people living in foreign lands who tell him what is really going on and not what some news agency first sanitizes before they disseminate to the public. No I’m not going to invest in a ham radio license and equipment just to get news because I have my own life, clients, students and so forth to deal with at the moment. If you desire un-sanitized news, then you will have to opt for something like becoming a ham radio operator.

So you will have to make a solid decision on occult authors at some point because the modern authors you love now are doing and saying things which later when they come to light, will repulse and abhor you. Why? They are people and people have a tendency to stumble and fall... a lot. If you are going to hold author A responsible for something said in a private discussion several decades ago, then you need to ask yourself about your own path, how you think, speak and act every moment of each day and if you say or do something which later you regret, are you not then as bad as those you finger point to?

When you are angry, arguing with another, and get to the point where you both begin to say evil things to one another, ask yourself if what you are saying, if immediately broadcast, would cause you to lose friends and supporters. Most likely, it would. Occult authors are like you, once something is said or done, it can never be taken back thus remember your own regrets when looking down on an occult author because she or he is just a person, like yourself, who can easily stumble and fall off the pedestal.

Posted by Moloch's Sorcery at 7:28 PM