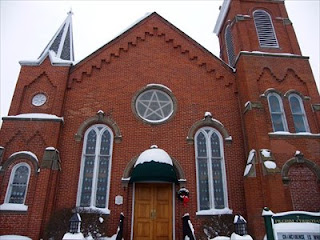 Really, just who are you so-called experts anyway? And where do you get off demeaning an entire sub-genre of people? And please, what makes you experts on the occult? And furthermore, who made you experts? Because I guarantee you this: myself and many other occultists have forgotten far more than you will ever know about the occult!

And the fact that you label all Witchcraft & Wicca, OTO, Golden Dawn, Vodu/Voodoo or Hoodoo as "Satanism" just proves how much of an occult expert YOU ARE NOT! Because a real expert would know the differences between each and be able to explain them which most informed occultists can do and yet no alleged Police occult expert is able too.

It is also telling of just how little you know when you automatically label finding a black candle stub, a crudely drawn pentagram and a Motley Crue CD at a cemetery as a "Satanic Ritual" when you have never seen nor studied what a real Satanic rite looks like. Such a finding may simply be a graveside ceremony for a deceased friend who liked Motley Crue and had a thing for black candles and pentagrams. Just because you might find a Star of David graffitied on a cement wall, does that indicate Jews are invading too??

The sad part is people like you are only interested in sensationalizing minor details to inflate and conflate them into whatever bullshit you want the public to believe them to be. You Police Occult experts remind me traveling evangelists because you have the same mentality, the same penchant for lying, omitting the truth, stretching details to fit your beliefs and conflating facts instead of attesting them for their veracity.

Can I say that all occult practitioners are like me? No. However I can say that out of the thousands of practitioners I've known in my near 34 years of involvement and practice in Witchcraft, Sorcery, Haitian Vodu and the Occult, I have yet to meet anyone who I would deem depraved. I have met a few who were a bit off in the head but lunatic fringe in groups is nothing new as the three Abrahamic religions all have their fair share of fruits, nuts and flakes among their ranks and they do nothing to rid themselves of these sickos!

Thus, before you go labeling our beliefs as depraved, look into your own family's religion's history and just see how sick, twisted and bloody your faith has been before you go pointing fingers. We are just tired of the Abrahamic cults and their intolerances towards others.

Posted by Moloch's Sorcery at 2:02 AM